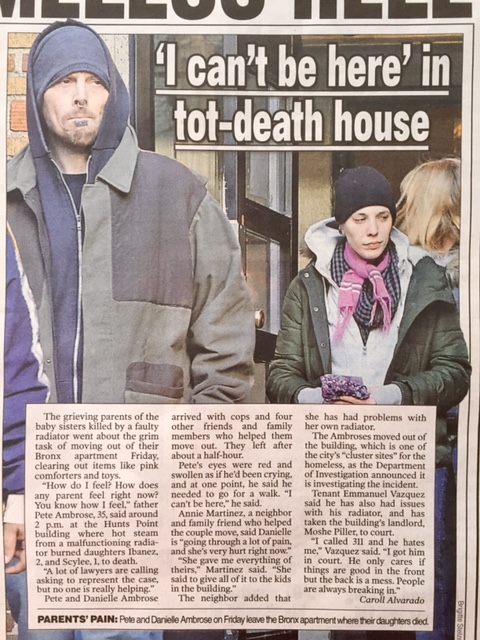 It's a horrible tragedy.

2 little girls were scalded to death by a broken radiator in their apartment.

An apartment they lived in provided by the City of New York.

You see, mom and dad were homeless.

NYC put them up in 'cluster' housing.

That means the City of New York agreed to house homeless people in various buildings throughout the five boroughs of New York City.

The City pays these landlords to house them.

Some of these buildings have violations.

These two little girls died because of a faulty valve on a radiator.

Days after this tragedy, both mom and dad were seen moving out of their cluster apartment.

A reporter from the NY Post threw out a question as they were leaving.

What kind of question is that??

He and his wife just lost their little girls.

Presumably because the radiator in their apartment malfunctioned.

He replied with scorn.

"How do you think I feel?" he was quoted as saying.

Then, he said something that made me stop reading.

I had to re-read the sentence to see if I read it correctly.

"A lot of lawyers are calling asking to represent the case, but no one is really helping."

I was amazed that this surviving dad let something slip and confirmed my worst fears.

Lawyers calling asking to represent them in this tragic case.

That sentence is a big deal.

Because lawyers are not supposed to call injured victims and ask if they want to be represented.

An attorney is NOT allowed to call up an injured victim and offer his legal services.

It doesn't matter how good a case they have.

It's in our ethical rules here in New York.

It's in black and white.

Every attorney must learn this and abide by this.

If an attorney is caught soliciting cases, he will likely lose his license to practice law.

It's that big of a deal.

But you should know that this goes on quietly.

"Nobody needs to know that I called you instead of you calling me. Ok?"

I've been in practice in NY for 28 years now and you'd hear about these things in the hallways of the courthouse.

You'd hear about them at bar association meetings and continuing education lectures in whispers in the corner.

Some attorneys would always get the biggest and most news-worthy cases.

The rest would wonder how they got those cases.

You never really knew unless you were privy to that.

Some hinted that lawyers had 'runners' at hospitals.

A 'runner' is someone who walks into a hospital or is employed by a hospital and hands out an attorney's business card to an injured victim.

Someone who's just been in a bad car accident.

Someone who just fell from a construction site.

A runner is paid to solicit new clients for an attorney.

If an attorney is connected to this scheme and discovered, he will likely lose his license to practice law.

In the movie "The Verdict" with Paul Newman, the actor plays a character who is a down and out personal injury lawyer in Boston. He's a drunk and desperately seeking new cases. He trolls funeral homes during funerals, handing out his card to everyone he sees.

Lawyers are calling this grieving dad.

If this grieving dad disclosed the names of each attorney who called him, the grievance committee would investigate.

If it turned out that these lawyers did solicit the family, there's a good chance they would lose their license to practice.

Why would an attorney do this?

To get this case.

Because it's a good case.

From the news article it sounds like the landlord is responsible.

It sounds like the City of New York is responsible.

It sounds like the agency that placed the family in this cluster housing is responsible.

Then, you have significant damages.

One with significant pre-existing medical problems.

The other, a sweet little innocent girl.

Significant damages for pain and suffering and wrongful death.

That's why lots of lawyers would want this case.

But wait a second...

What if dad misspoke?

What if instead, he had called lots of lawyers for help?

What if these lawyers now returned his calls and offered advice?

In that instance, there would be no problem.

That's what personal injury lawyers do.

The parents would then have to decide which attorney and law firm was right for them.

Maybe they'd be impressed with a big law firm in New York City.

Maybe fancy furnishings would convince them to sign up.

Maybe they are impressed with the attorney who shows up at their home so they don't have to trudge into New York City.

Maybe they want a solo attorney who is always on top of the case.

Then again, maybe they want a firm who has successfully sued the City of New York often.

Maybe they want a firm with a proven track record of large settlements and verdicts against the City.

Choosing an attorney in this situation is never easy.

But the second part of dad's comment says it all...

Referring to all the lawyers who are calling, offering their legal services.

What exactly does this grieving father want as far as 'help'?

What does he envision an attorney can do at this point?

What type of 'help' does he want or need right now?

The article didn't delve into that.

Assuming that the article accurately reflected what dad said, that lots of lawyers are calling him, that tells me these lawyers are desperate.

They want to reach out and get the case before their competitor does.

This is a competitive world.

However, if this scenario is true, I am appalled.

And, I want to apologize for my colleauges who may be doing this, if true.

The public may not realize he let the cat out of the bag.

However, you should know that most attorneys do NOT do this.

Most attorneys are ethical and abide by the ethical rules and guidelines.

As with any profession, there are some bad apples.

Hopefully, the grievance committee will, on its own, look into this to determine if these lawyers were soliciting the case or this was a misstatment that really meant he had called different attorneys for immediate legal help.

To learn 5 reasons not to bring a wrongful death lawsuit in New York, I invite you to watch the quick video below...