During Opening Arguments in a Medical Malpractice Trial, Can I Object to What My Opponent is Saying? 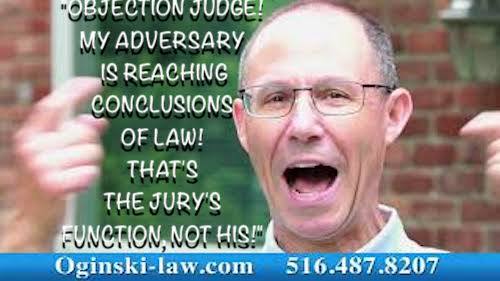 I don't really like my adversary.
He's not very nice.
We barely get along.

That's unusual for me since I usually get along, professionally, with most of my opponents.
Until they piss me off.
Until they do something that gets under my skin.

Until they don't extend a common courtesy that I would do if they asked.
Like agreeing to postpone a conference a few days later because of a personal matter.
Like not agreeing to admit a piece of evidence when there's no dispute about the evidence.

You sued your doctor.
For medical malpractice.
For causing your injuries.

Your doctor denies doing anything wrong.
He denies causing you harm.
He also claims that your injuries are not that bad.

Well, your case finally comes up for trial.
Two years after you started it.
We attorneys have now met with the trial judge.

The judge now knows what your case is about, how long the trial can be expected to last and who our experts are.
My adversary was being a jerk.
I was having scheduling problems with my expert.

I was trying to get him into court during the days I'd be presenting our proof.
I asked the judge if I could take his testimony 'out-of-turn'.
Meaning, that the defense would be presenting their proof and in between his witnesses, I'd have my expert testify.

The judge asked my opponent if that would be Ok with him.
He said "No."
That pissed me off.

That's commonly done.
The judge asked why not.
He gave the judge some bull excuse.

I advised the judge that my expert is only available on that day and at that time.
The judge finally agreed with me.
But my adversary annoyed the heck out of me for no reason other than he could.

Moments later we were back in the courtroom starting your trial.
The jury was brought in.
The judge gave the jury some preliminary instructions on what to expect during the trial.

He gave them some warnings about not making up their mind till the very end and not talking to each other about the facts of this case.

Immediately after my opponent started talking, I wanted to jump up out of my seat and yell out "Jurors! Do you know what an idiot my oppenent is? He has no idea what he's talking about!"

I really wanted to do that.
But I couldn't.
It wouldn't be professional.

In fact, he was doing exactly what he was supposed to be doing.
Presenting his version of the facts.
I had no right to object.

In that instance I could jump up and in a voice loud and keen yell out "OBJECTION JUDGE! MY ADVERSARY IS REACHING CONCLUSIONS OF LAW! THAT'S THE JURY'S FUNCTION, NOT HIS!"

Why would I do that?
There could be a few different reasons.
The first is that he's actually doing what I claim he's doing.

There are a few other reasons, but I'll leave those for another day.

Customarily you don't object to your opponent's opening or closing remarks unless what he's doing is outrageous or clearly calls for the judge to interject and tell the attorney to stop doing what he's doing.

Having said that, if my opponent is clearly doing something improper, I have a legal obligation to stand up and alert the judge to the problem. I need him to address it immediately.

To answer the question I raised in the title of this video...

Can I object during my opponent's opening argument?
I could if I needed to.
Will I?

That depends on what my adversary does.

To learn more about opening arguments, I invite you to watch the quick video below...